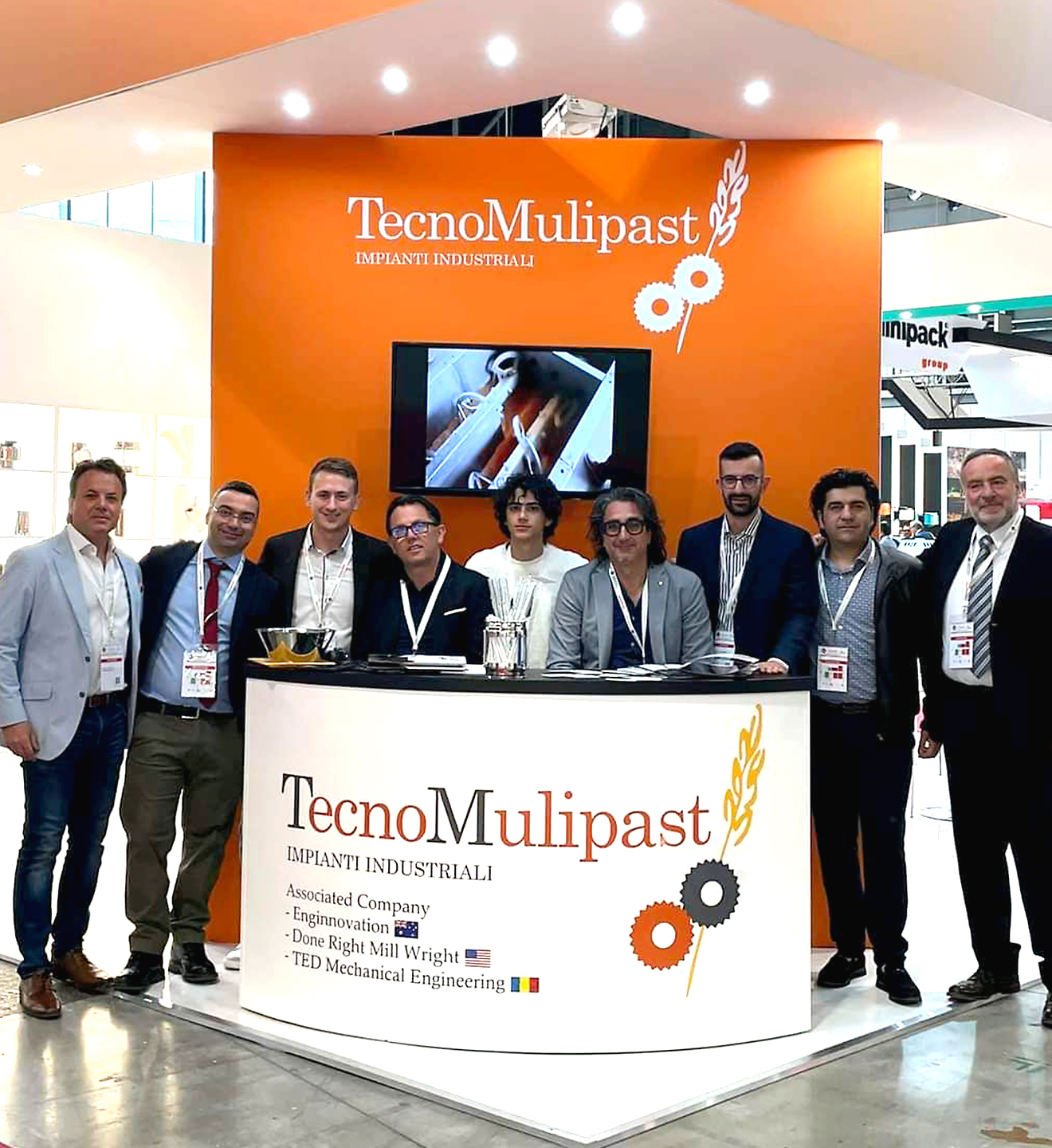 TecnoMulipast Group includes several engineering companies which design and manufacture equipment and circuits for industrial suction and filtering systems and builds industrial and technological systems.
All the companies part of Tecnomulipast Group are specialized in installation and assembly of milling systems, pasta and food production. Undisputed competence is demonstrated daily in the field also in maintenance, repair and technical assistance works.

The history of TecnoMulipast Group began in 2007 in Gravina in Puglia (Italy), from a project arose by two founders, Giovanni Giorgio and Donato Laddaga, whom strongly believed in its feasibility and in which they poured enthusiasm and expertise.

Initially, the company’s core business was focused on mechanical installations of various machineries for food, milling and grain industry, however, shortly after its founding, to meet the ever-increasing demand of the market, it began on-site production of steel carpentries, conveying equipment and storage systems for grains and flours, all products recognized today as international excellences.

The many years of experience of the Giorgio-Laddaga’s Business partnership, with them design and installation team, makes Tecnomulipast quickly being one of the main certifiied suppliers of the largest companies in our Country, having customers such as F.lli Divella, Barilla, Pasta De Cecco, Buhler, Farchioni, etc.

In addition to the milling field, the company succeeds in establishing itself as a leading company in other markets, obtaining recognition as the official supplier and installer of mechanical systems for large industrial groups in the coffee, brewing, pasta, cocoa, flour milling, feed milling, chemical, pharma, mining and oil & gas.

The results achieved, first into the Domestic Territory and then in the European one, have pushed Tecnomulipast to open over the years other companies abroad, such as Enginnovation Pty Ltd in Sydney (Australia), Done Right Millwright Inc. in Aberdeen Township, NJ (USA) and TED Mechanical Engineering SRL in Bucharest (Romania).

In 2014 Giovanni Giorgio and Donato Laddaga decided to export their know-how to the world and more specifically to Sydney, Australia. Here, thanks to a business plan agreed directly with the Australian Government, which issued the authorization to start and to operate business activity, they decided to establish a trading company, Enginnovation Pty Ltd, with the aim of opening up to the Australian market, but leaving the entire brains about production segment in Italy.

The imprint of internationalization established, since the opening of Tecnomulipast and then proclaimed successful, with the subsequent opening of Enginnovation, pushes the willingness of the ownership to replicate the same layout in the largest market: United States of America

Since 2018, is born Done Right Millwright Inc. with Mr. Vincent Tragni who joined the ownership. The connection between a very dynamic market, such as the U.S. and an established know-how of the activities, leads Done Right Millwright Inc. to be, in just two years, one of the main authorized suppliers of the world giants of the grain, milling and biofuels industry such as: Archer Daniels Midland, Didion Milling, Star of the West Milling Co., Italgrani USA, P&H Milling Group, Ardent Mills and so on.

Finally in 2020, in order to increase the group’s presence and to export business in to the markets of Eastern Europe and Asia, born TED Mechanical Engineering SRL in Bucharest, Romania, replicating the same well-established and proven layout as in the previous two Done Right Millwright and Enginnovation too.

20+ YEARS
OF EXPERIENCE
1
WE ARE AT FOREFRONT
IN spouting ducts INDUSTRY!

All companies of the Group are committed to the constant searching for system innovation and technological development of production processes, in order to always guarantee maximum effectiveness and efficiency, satisfying customer’s requests.

We make all our knowledge and expertise available to our clients, without reservation, so that we can choose and design with them the most congenial solutions for each requirement.

Constant discussion with customers and suppliers, as well as with research institutions enables our group continuously to improve our products and production processes. Consequently, the quality which we offer to our customers.

We have chosen to focus on flexibility our work, both in the production of components, both in installations, so that we can offer to our customers a state-of-the-art and tailor-made systems.

Our VIEW OF THINGS

Sharing knowledge, ideas and experience with our customers, so that we can offer them ‘tailor-made’ industrial plants, made with finest materials and the most innovative production techniques.

We want the TecnoMulipast Group to become a global benchmark in the design, installation, assembly and maintenance of industrial plants in the food, pet-food and related sectors, as well as a major manufacturer of all components which links these plants.